The Hooded Crow was a recent commission for a star gazer in the Netherlands, she tells there is a recognisable pattern in the stars I have drawn. What those stars have to say is a mystery to me, perhaps yet to be revealed. Can we see into the future when we look at the stars or are we only observing the past?

"Que sera, sera, whatever will be will be, the future's not ours to see..." My mum's favourite Doris Day song and one which she sang to me in the fifties. Most of this month so far has been dominated by my mum's health issues. She sustained a very nasty fall and is now in hospital, my thoughts go back to those words as we contemplate an uncertain future.


I have been grateful for small diversions; afternoon tea at Chetham's Library provided a welcome break and a chance to explore a magical and ancient library right in the centre of Manchester. This is the oldest public library in the English speaking world, founded in 1653, although I think the building itself is far older. It certainly had a very Gothic feel and as the January afternoon became darker the mood intensified. We took afternoon tea in the Baronial Hall which was every bit as grand as its name suggests. There we were welcomed by our friend Sue who is the Heritage Manager for the library, better known to bloggers as Mouse from Mouse Notebook. I can't imagine a more interesting workplace.


I have also been happy to loose myself in the gentle art of hand quilting, the slow and rhythmic pace of hand stitching has helped ease the anxiety of caring for an elderly loved one. I have been making a start on making an actual fabric version of "The Dream Quilt". After trying several digital printers and after much tweaking and adjusting I now have some actual printed fabric. The designs on the fabric are from the recent book I illustrated, words by Adele Geras. Co-incidentally, the lovely little heart shaped pin cushion is also the work of Mouse.

BBC Radio 3 recently broadcast "The Pearl Fishers" which was performed at The Met in New York. I stitched this little fish square transported to another place by the famous duet, sobbing and stitching in equal measure. 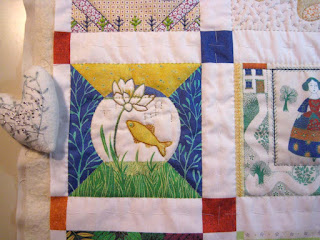 And now, I must wish you all a Happy New Year, may all your dreams come true. x