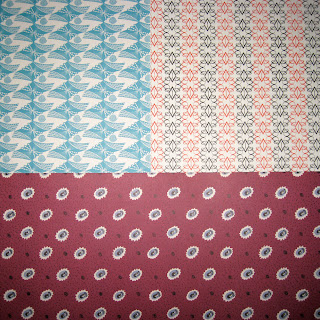 Ever since I was a child I have had a fascination for pattern, pattern as being defined by the repetition of similar forms. I suppose that is what I try to achieve when I paint, I look for pattern and decoration in feathers, leaves, bark. Maybe that is why I have admired designer’s rather more than fine artists, being naturally drawn to those artists and craftsmen who can both draw beautifully and design. One such artist is Eric Ravilious, so when I saw this Curwen patterned paper (see top left) I seized upon it with glee. The gorgeous collection of Curwen papers was for sale at the Oxford Fine Press Fair (mentioned in my last post), on the John Purcell stand.

There is some dispute over who actually designed this paper. The folks at John Purcell papers said that the man to ask was on the Incline Press stand so I decided to enquire further. Having a head like a sieve I got him to write down what he knew of the pattern, the story he told me was fascinating. It seems that an artist and textile designer called Enid Marx, who had worked with the Incline Press, identified the pattern as a 1928 Curwen pattern by Eric Ravilious. Apparently Enid had desperately wanted to learn wood engraving as a student but her tutor thought her drawing skills too poor. The young Ravilious took it upon himself to pass on the skills he learnt in his lessons and Enid would go around after class and Eric would go through the day’s lesson with her. There is another school of thought that believes the pattern to belong to the era of the Festival of Britain but I am going with Enid on this. What do you think? 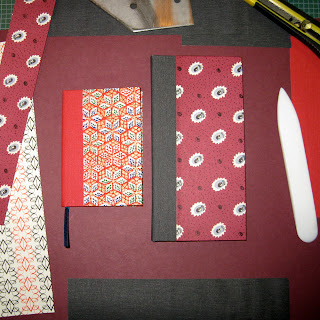 The black, white and red paper is by Edward Bawden, I am not sure whom the lovely deep red pattern is by, maybe someone can help here? Anyway, needless to say I came away with samples of all three papers and have enjoyed covering diaries for Christmas presents. The tiny diaries are covered in a Japanese paper, again I knew the name once but my brain has long since shredded that bit of information, I should really write these things down!

footnote; since I posted this The Incline Press have been in touch to say that the lovely deep red Curwen paper is by Sarah Nechamkin, a wonderfully prolific paper pattern designer in the late 1940s. Thank you Graham for that information. 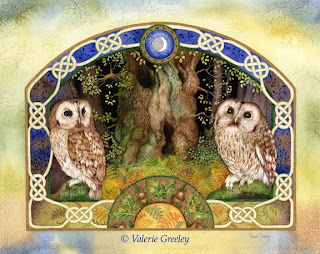 Oh yes, before I forget, I finally finished the owl painting. The two tawny owls are standing either side of a very old oak tree, which put me in mind of the rhyme about an owl standing sentinel, I think from Mother Goose? The tree appears to be keeping watch also, maybe they are looking out for each other.
Posted by Acornmoon at 12:13 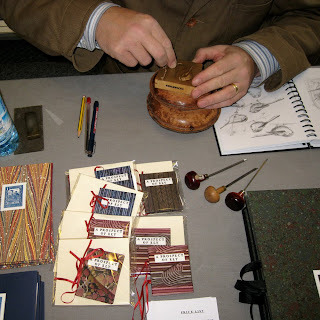 Amongst the many exhibitors was Andy English (in the photograph above) whose work I admire greatly. It was a pleasure to see him in action carving a new block. I also got the chance to see his new collection of engravings for "The Woman in Black" by Susan Hill. Amongst his collection of exhibits were individual prints, bookplates and miniature books including a new, limited edition of "A Prospect of Ely" which you can see in the foreground of the photograph. (If you click on the photograph you will see more details.)

Andy is a full-time professional engraver, he has a blog called The Wood Engraver where you can learn more about his work with links to his website and shop.

The book fair was a great place to buy papers, so many beautiful hand marbled and paste papers and a lovely selection from The Curwen Press in particular caught my eye. There were stalls selling leather and bookbinding supplies too as well as stands selling beautifully produced hand bound books. The overall effect was so exciting and inspiring that today I feel rather exhausted.

I should be putting the finishing touches to my latest painting, shown below, almost finished now but I need to think a little more about the last bits. I had toyed with the idea of using gold leaf but now am not so sure.....? 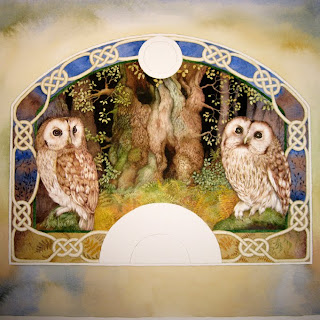