The Egg and the Chicken. 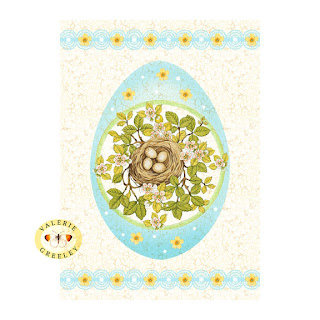 Blue skies and sunshine at last, after an unusually cold winter, spring is trying its best this Good Friday. Before I speak too soon and scare the sun away, may I wish you and your loved ones a very Happy Easter. We are looking forward to seeing our family and exchanging Easter eggs and treats. 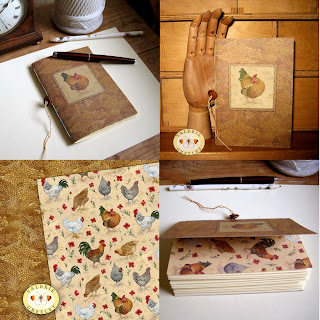 I made a little time for bookbinding, inspired by some patterned papers I printed, using designs I made for textiles. I only have an A4 printer so am restricted to small-scale books. I even found a use for some old buttons from my collection; I seem unable to pass a charity shop these days without foraging for such treasures. If you click on the photo’s you will see more detail. I also made a few books for my Etsy shop too whilst I was playing. 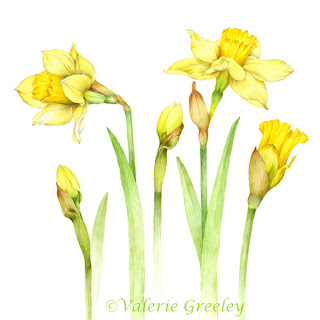 Last weekend we had a trip to London, taking along our camera minus the battery. I had intended to show you all the lovely things we encountered on our walk along the Thames starting at Hammersmith and ending in Chiswick. We walked past Hammersmith Bridge where the book binder and co-founder of The Dove Press, Cobden Sanderson, stood before throwing the type from the press into the Thames. (You can read what drove him to this barbaric act here.) 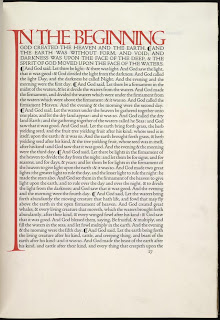 We saw properties once owned by William Morris and his friend and mentor Emery Walker. Further along the bank we saw and the home of Ravilious and stood awhile under the blue plaque on wall. The level of the Thames was dangerously high and in places spilled over the banks, threatening many properties and gardens. We explored the very spooky graveyard around the church at Chiswick before exploring Hogarth’s House complete with spring garden filled with daffodils and violets. All of which I intended to photograph, now you will just have to take my word for it! 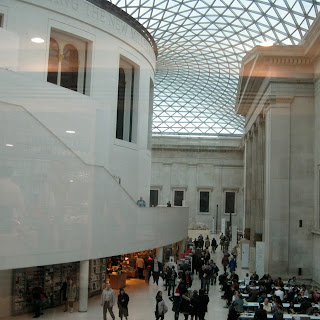 The weather could not have been colder and icy wind chilled us to the marrow. We decided to take refuge in The British Museum where we saw, rather appropriately I thought, an exhibition about art in the Ice Age. I had no expectations about this, thinking that there would be little art surviving from over 40,000 years ago. The art on display was extraordinary, original pieces from ancient civilizations displayed alongside contemporary pieces by artists inspired by the primitive. There was a quote by John Berger written on the wall, next to the exhibits that stuck in my mind-
“Art, it would seem, is born like a foal that can walk straight away..”

Perhaps the creative spirit is something, which has always existed in the human brain, so too I believe, is the sense of the aesthetic and the ability feel uplifted by beauty. Many of the exhibits were carvings on bone, depicting the animals that lived alongside Cro-Magnon man. There was a suggestion that because the drawings were sequenced this was maybe an attempt at animation and that maybe the artist was trying to depict movement. Maybe he was making an attempt at pattern design?

We came away from the exhibition feeling enthralled and amazed by this window into an ancient world. So seldom do I feel so uplifted after visiting contemporary art exhibitions, which seems to have an obsession with the shock factor and ideas over substance. Ice Age man would have found survival difficult enough and yet found a place for art, decoration, jewelry, music and beauty. 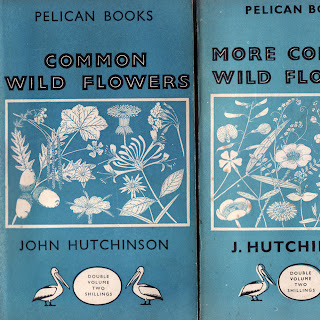 And now, for something a little more down to earth. I found two lovely old Pelican Books on Wild Flowers and felt inspired to make some sketches of plant forms. I wanted to keep the drawings very simple in order to incorporate them into a new design group inspired by lino printing and nineteen thirties textiles. Apart from the hand drawn plant shapes the designs were made digitally. I tried to keep the colours very subtle and slightly faded, my husband remarked that they reminded him of remnants of wallpapers which appeared under layers of papers when we decorated our 1930’s house. Wouldn’t it be a good idea if everyone kept a scrapbook of the décor of their home complete with fabric samples and photographs of the interior and exterior? 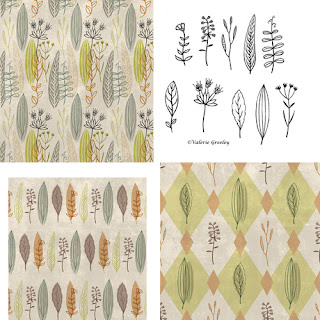