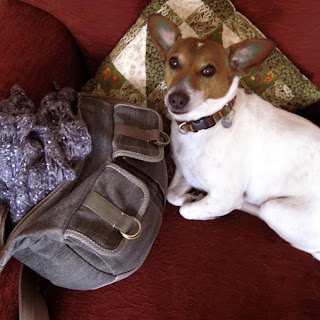 I have been invited by Frances from Fairy Lanterns who in turn accepted an invitation from Frances of City views, Country dreams to reveal the contents of my handbag.
Both of the aforementioned have wonderful blogs, which are well worth a visit.

Now them, I don’t actually use a handbag as such but I do carry a rather scruffy shoulder bag on most excursions outdoors. I bought my bag in Bruges three years ago and have been using it constantly ever since. It reminds me of the kind of bag Isaac Walton would have taken with him on a fishing trip; it could well be a described as a manbag!

Inside, slightly more feminine and even a little bit canine. In the small front pockets, a hair appointment loyalty card, tissues and what are sometimes rather politely called “dog waste bags”, unused I hasten to add!

In the main part I have the usual, purse, keys, mobile phone, camera (you never know when the next photo opportunity may arise) and glasses. A tiny notebook with a tulip cover, which a friend brought back, from The Rijks Museum. A handmade leather notebook, one of my many attempts at bookbinding. A tissue holder which I made using some Debbie Mumm fabric and a little coin purse which I sewed using some of my own fabric which this holds change for the car park and two lipsticks. I also have two Oyster cards from a recent trip to London; these are used by Londoners on buses and tubes and can be topped up when needed. Last but not least I have my trusty green umbrella and lovely silk lined soft black leather gloves both of which were presents from my mum.

I would like to invite you to play along if you have the time or the inclination. Do you favour the handbag or the manbag? 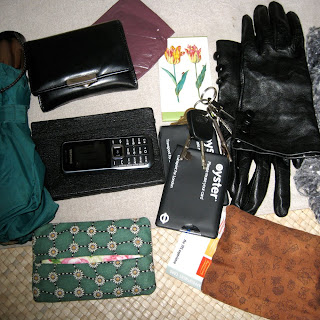 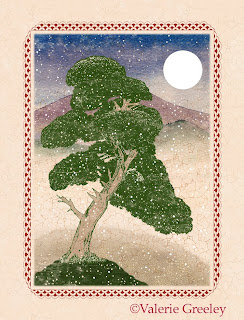 “May you have warm words on a cold evening,  a full moon on a dark night and the road downhill all the way to your door.”
This Irish Blessing is a day late for St Patrick’s Day, no matter as the Irish say "when God made time he made plenty of it" so please forgive my late entry.

I have been experimenting with making masks in Photoshop, like all newly acquired techniques it is easy to become slightly carried away..
This is a computer-aided image, which started life as a watercolour painting. I wanted the look of a Japanese wood block so I layered some previously hand painted textures and patterns together with a bonsai tree (photographed with an added stamp filter). I then applied a wood effect mask and added a decorative border. At least that is the way I remember the process; I suppose I should call it mixed media!

I have always loved Japanese wood block prints, especially the subtle gradations in colour. When we went to the recent Van Gogh exhibition at the Royal Academy we saw how much of an impact Japanese prints had on artists at the time. This influence could be clearly seen in the many reed and pen drawings, which had been assembled for the exhibition. I don't have an image from that particular exhibition but this drawing "Tree with Ivy in the Asylum Garden"  1889 ; Pencil, chalk, reed pen, and brown ink on Ingres paper, Rijksmuseum Vincent Van Gogh, Amsterdam is typical of the many very decorative drawings that Van Gogh made in his short and troubled life. It seems extraordinary that an artist so prone to misery and despair could leave such a legacy of joyous artwork. 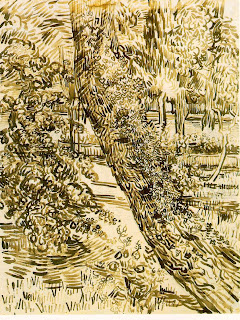 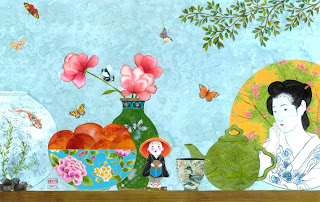 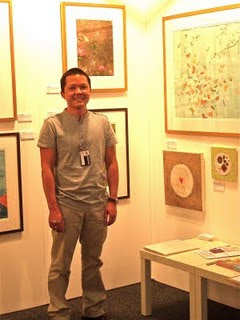 Allow me to introduce to you an amazing young artist called Chris Chun. His colourful and highly decorative artworks are inspired by beauty, nature, travel and food. 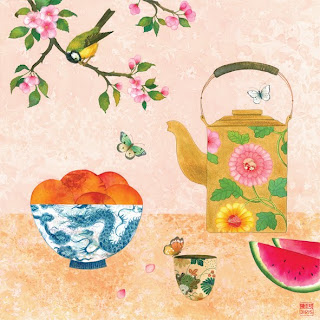 All of his work is a visual celebration of the joy of life and his images positively sing with exuberance and joie de vivre. He has very kindly allowed me to showcase some of his work here, I am particularly intrigued by the process he uses to create his art, using a combination of collage, painting and sometimes sewing. You can see some of his work in progress here on Chris’s blog. 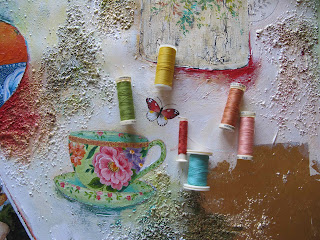 My favorite piece is called “Mum’s Altar table” (see top illustration) a mixed media work in acrylic, ink, gouache and tissue paper collage. Chris says’ about the work :-"This painting is taken from Mum's altar table. It displays my lucky monk I bought from Japan as a kid as well as goldfish and various antique pieces from Mum. There are lots of good luck charms on the table"

You can find out more about Chris here on his website, you may be also tempted by some of the many goodies in his shop!
Posted by Acornmoon at 02:27

The Joys of Spring! 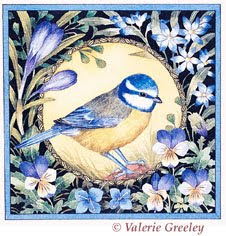 This weekend brought sunshine, family and great joy into my life.
The sun shone, the skies were blue, the birdies sang and flowers opened. What more could a person want? I hope your days are joyous too. 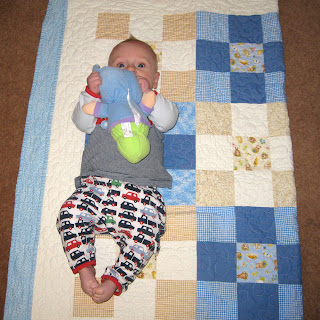 Grandson George played on his "Nestled in Springtime" quilt. The days were bright and clear, perfect pram pushing weather and in the garden the crocus bloomed. 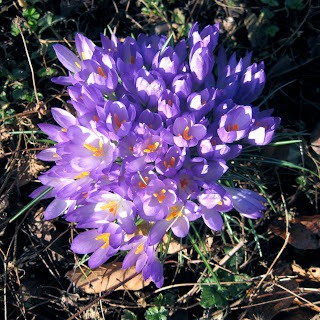 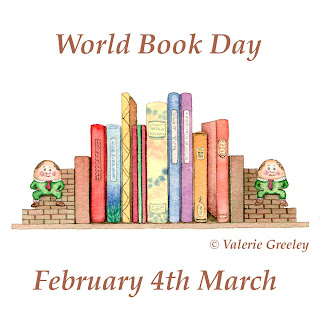 Today is World Book Day and I would like to announce the creation of a new website aimed at children and schools. It is the brainchild of Antony Lishak and is called The Author Hotline. Antony describes the site as follows-

“Aimed at primary school children, it sheds light on the creative process, is a perfect way of supporting author-study work, provides a great way for young authors to identify with professionals and is endless hours of enormous fun”.

I have participated in an interview, which is available on the site along with many other children’s authors and illustrators. It is some years now since I did a school visit, answering the interview questions reminded me of one particular young lady that looked at my work and then asked, “and do you do all your own colouring in?” I now look back on my career as almost thirty five years of colouring in! It was my favourite pastime when I was a child and am happy to say that it remains so.
Posted by Acornmoon at 04:04