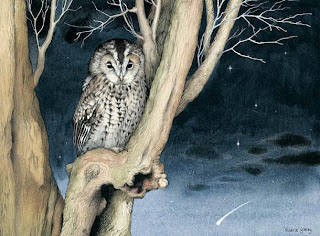 The inspiration behind this illustration from "Down the Lane" was the sighting of a "shooting star" which zipped across the night sky in November.

When I was a child I was very captivated by the lyrics of the Perry Como song “catch a falling star and put it in your pocket”
I grew up in a fairly built up area with yellow street lights and so had to wait several years before I first saw a shooting star, which I since learned are not stars at all but meteors.

If you were lucky enough to be in the Northern Hemisphere and had a cloud free view of the November sky recently, maybe you caught sight of the annual Taurids meteor shower which occurs in the region of Taurus?

I think it is a great pity that we have so much light pollution in our towns; most city children are unaware of the night sky. There are few things more inspiring and challenging than contemplating the universe.
Posted by Acornmoon at 01:34