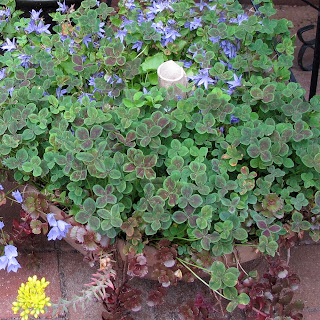 I recently read “Jane in Winter” by Elizabeth Wix who many of you may already know from “About New York” Elizabeth grew up in England in the fifties but now resides in New York. Although the book was originally written for the 8-12 age group I found it fascinating, a sort of escape into a slightly disconcerting fantasy world with fifties nostalgia. It is both cosy and scary in equal measure and I know that I would have devoured such a story when I was young. It reminded me very much of Edith Nesbit.

There are many things to love about this book but for me it was being reminded of childhood pastimes, some of which I still have not entirely grown out of; that of making gardens in miniature. When I was a girl this was “all the rage”, in fact most of my childhood pastimes involved lots of imagination and no expenditure! We used mirror pieces for lakes, stones and rocks to create paths and mountains, mosses and small plants became gardens, fir cones became forests. I dare say many of you will have done much the same thing? Today my miniature gardens are in shallow bowls rather than trays, I still make use of pebbles, shells, and pieces of ceramic, whatever takes my fancy. One of my favourite plants for such environments is a clover -Trifolium Repens “Purpurascens Quadriphyllum” which was given to me by a gardening neighbour. It has reddish/purple leaves edged with peppermint green and white flowers. It can be invasive so living in a dish suits it fine! Interestingly Judith Glover has a similar plant featured in her garden notebook, see post below.
Posted by Acornmoon at 02:08