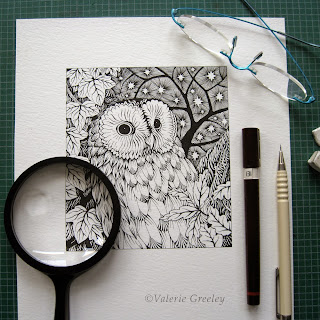 July is almost over; I can hardly remember a hotter summer. It seems strange that most of my work has been winter themed. So whilst the bees have been humming and the flowers blooming I have had to turn my thoughts to snow and ice.

I mentioned before that I have been illustrating a Christmas book not quite knowing when it would be appropriate to reveal exactly which book and for whom. Well, now my secret is out, a recent article online reveals all.
I have been working on a series of illustrations for “Can it be True?” by Susan Hill, her company Long Barn Books will publish it in September. I will post more images soon when we are all in a more Christmassy mood.

Each illustration started life as a black ink drawing and colour being added digitally at a later stage. The owl drawing is very much a work in progress; the final pages are in colour. When the book was first published it was illustrated by Angela Barrett. I make no secret of the fact that I was absolutely thrilled and terrified in equal measure to get the chance to do a new version. I hold Angela’s work in the highest esteem; she is without doubt one of our greatest illustrators and an impossibly hard act to follow. I was given great freedom to create my own version, the one condition was that I had to do something with a very different feel, to say that I have lost sleep over this would be an understatement, too late now though, it has gone off to the printer.

As you can see I have drawn some of the ivy growing in my garden, although it looks more like this at the moment. 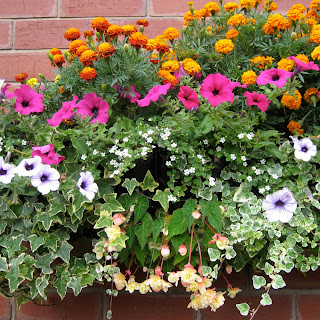 Earlier in the month I went down to London to see this years Texprint exhibition. Each year 24 textile design graduates are chosen from UK colleges and universities to take part in this prestigious event. In 1975 I was amongst the fortunate ones to participate, in those days the exhibition was held at The Design Centre which was on The Haymarket, this years venue was The Chelsea College of Art and Design. The graduates are given the opportunity to connect with industry professionals and hopefully gain placements, jobs and commissions. I was very impressed with the overall standard of work on show, so much talent, innovation and skill. You can see some of the things these young designers produce by following the links here Texprint helped me to make my dream of becoming a designer a reality and I wish each and every one of this years graduates the very best of luck. 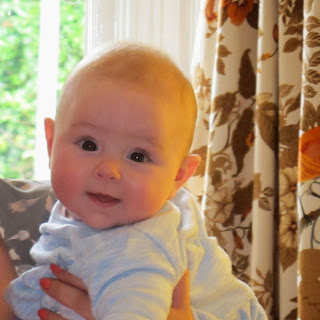 I will leave you now with this darling smile from our beautiful granddaughter. In the background you will see my ancient dining room curtains. The bolt of fabric was given to me by Jane Teale; who I worked with in the seventies. She commissioned and printed my design “Blue Jays” (this being a brown version). Oddly enough I met Jane through Texprint almost forty years ago. It’s about time I got myself some new curtains don’t you think?
Posted by Acornmoon at 09:21