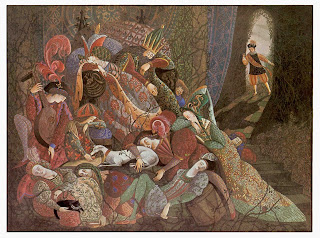 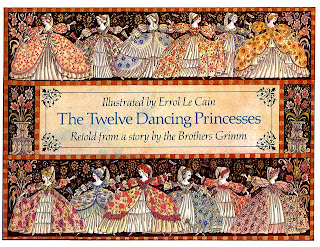 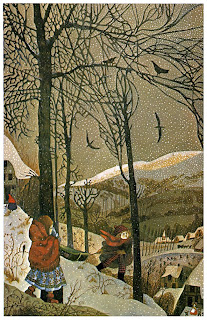 I have been an admirer of the work of Errol Le Cain for many years now and have been delighted to find this website by Michael Sporin, who has posted many images from Le Cain's books and has very kindly agreed to let me share them with you.
I particularly like the very decorative style of illustration used in the above illustrations taken from "The Thorn Rose", "The Twelve Dancing Princesses" and "the Snow Queen". He was undoubtedly a master of his craft, and a superb artist who's work may well be forgotten as many of his books are now out of print. Fortunately his work is being kept alive by book lovers and collectors and there is now a website dedicated to his work, run by Tania Covo.
His work shows the influence of some of the places he has lived, much of his formative years being spent in India and the Far East. You can read more about his life and work as an illustrator and set designer in the websites mentioned. Sadly, his life was cut short after a long illness, he died whilst still in his forties and no doubt in his creative prime, in 1989.
Posted by Acornmoon at 02:32