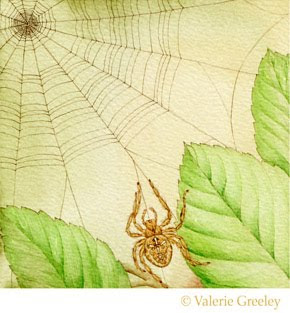 The little watercolour study above of an orb spider weaving its web is taken from “Animals at Home”, a children’s book I worked on many years ago. Whilst admiring the delicacy and intricacy of a spider’s web, it is hard not to find them more than a little creepy. I am not the sort of person who runs screaming from the bathroom when confronted with a spider in the shower but they do hold a weird sort of fascination don’t you think? So when I heard that someone had actually managed to capture this thread and weave it into a cloth, I was intrigued to say the least. 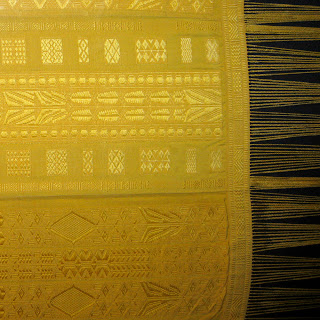 On a recent trip to the V and A in London we decided to see for ourselves and visited the Golden Spider Silk display. The two garments, a cape and shawl, are the work of Simon Peers and Nicholas Godley and are truly mesmerizing. The silk has been gathered from Golden Orb spiders found in Madagascar. It has taken over four years and the silk from countless threads; each thread being made from 96 twisted spider strands, to make the brocaded shawl. The resulting garment shimmers like sunlight on gold.

The exquisite cape has been inspired by the myths and stories, poetry and nightmares surrounding the spider. The original design is also displayed; this working drawing is a work of art in itself. 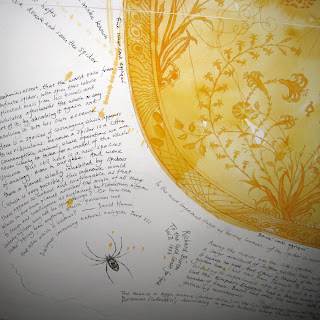 The cape has been lavishly embroidered with threads and stitches so fine that it is hard to believe that human hands are capable of such a feat.
It is said that over a million spiders and thousands of hours have gone into its creation. It is quite simply out of this world, I cannot imagine how it would feel to have it next to my skin but I am told that the fabric made from spider silk is extremely light. It put me in mind of the song from the Emperor’s new clothes, “The king is in the altogether!” If you get a chance this is a must see exhibition, you can see more here. 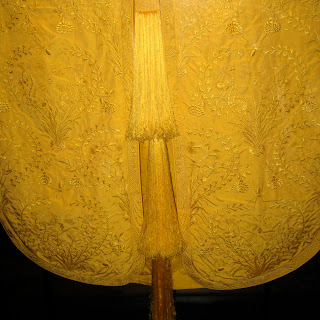