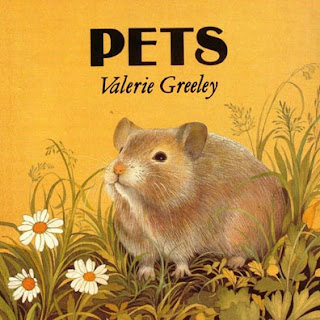 In 1981 Blackie Children’s Books Ltd published a set of four wordless board books for babies, one of them featured a hamster on the cover. The title of the book was “Pets” ISBN 0216909821. The cover featured my illustration of a hamster and included my name Valerie Greeley and the title “Pets”. The books did very well and sold co-editions in America and Europe, in the USA they were published by Peter Bedrick.

Many years later a friend notified me that he had seem a satirized version of my book cover on a joke website. The title “Pets” had been digitally removed and the title “Pop goes the Hamster and other fun microwave games” added, my name and artwork remained. The website was a humorous site aimed at students and young people, the page in question listed many fake/altered titles of children’s books. I remember being rather bemused at the time and worried that people would think it was an actual book, I think I emailed the site owner at the time and then got on with my life. If I had understood the nature of the Internet and could have foreseen the development of social media sites I would have been a little more vigorous in my attempt to have it taken down.

Since then the spoof image has appeared on very many joke websites but even more worryingly has been Facebooked, Tumbled, Tweeted and Pinned without any reference to the fact that this is an unauthorized fake book cover. In short it has gone viral and despite sending out numerous DMCA notices I have been unable to stop it.

So, if anyone reaches this page by searching for some clarification please rest assured that “Pop goes the Hamster and other fun microwave games” is a fake/spoof altered image and is absolutely nothing whatsoever to do with me!

Both of our hamsters, Frisbee and Chuck, lived long and happy lives and died of natural causes.
Posted by Acornmoon at 01:48