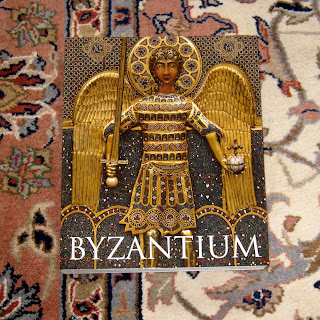 We recently visited The Staffordshire Hoard exhibition at the Potteries Museum in Hanley. The largest and most valuable Anglo-Saxon treasure ever found. You might expect work done so long ago in “The Dark Ages” to be lacking in finesse, nothing could be further from the truth. The level of craftsmanship in this beautiful collection of gold and garnet artifacts is quite staggering. It put me in mind of “The Byzantium” exhibition we saw at the Royal Academy some time ago. Fortunately I had invested in a copy of the book which was sold alongside the show, it was good to be able to use it for reference to a new project that I am working on.

Both exhibitions feature delicate and very decorative gold crosses and I decided to make this a starting point for a new design. I incorporated spring flowers, giving them a very formal, symmetrical structure. You can see a glimpse of the work in progress here. I added gold ink decoration at a later stage. 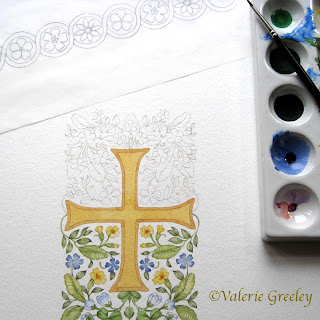 The temperatures around here have been unusually cold and my poor old mum has been complaining of very cold feet. All the shops are full of spring attire so I decided to pick up my knitting needles again and have a go at making some. I found this pattern called “Aunt Maggie’s slippers” by Beverly A Qualheim on the Ravelry site available as a free download. I have to thank Annie from Knitsofacto for inspiring me to knit again after many years of abstinence, although I haven't been brave enough to tackle her patterns yet. I think I need to brush up on my skills somewhat but I have my eye on her Downton Hat. Isn’t the internet a wondrous thing? I think I gave up knitting when the local wool shops closed their doors.

The little shoe/slipper pattern is ingenious and very easy, knitted on just two needles. Miraculously it sews up into a little shoe. I can imagine these little slippers to be made of chain mail and worn way back in “The Dark Ages” or am I being a little too fanciful? Maybe. 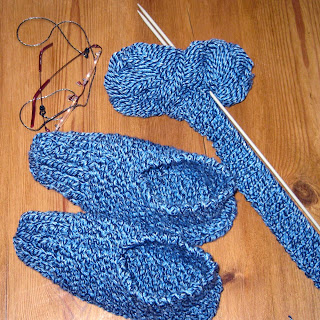