A lovely day at the V and A. 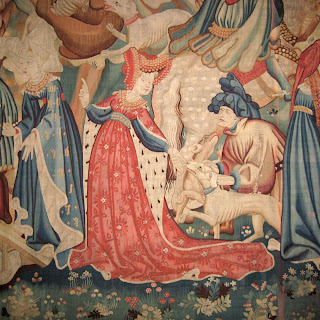 I am a little late in writing about our most recent visit to London at half term but better late than never I suppose. Tony and I caught the train down to Euston and stayed for three nights in the city, primarily to visit our eldest son but also to cram in as many museums, galleries and shops as we could!

We managed to see the Van Gogh Exhibition at the Royal Academy, The Chris Ofili exhibition at the Tate Britain and some of the many treasures at The British Museum, but the jewel in the crown was a visit to the newly opened Medieval and Renaissance wing at the Victoria and Albert Museum. 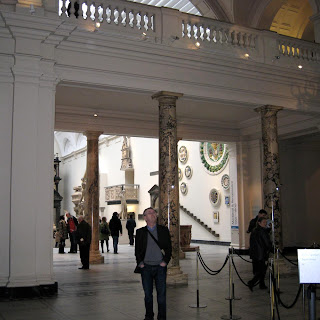 There are now ten new galleries spread over three floors, textiles, and paintings, sculptures all of which are unmissable. There was so much to see and so little time to see it in, here a just a few of the very lovely and inspiring things that caught my eye.
“The Boar and Bear Hunt tapestry”, see detail above, dates back to the fourteen hundreds, as well as depicting the hunt in all its gory glory, the tapestry shows the costumes and fashions of the day. The lady above is proudly displaying her coat lined with miniver, an expensive fur made from the bellies of Baltic squirells. It is thought that a coat like this would have taken the fur from hundreds of squirrels killed during the winter months. I suppose conservation was not an issue back then! Click on the images for a closer look. 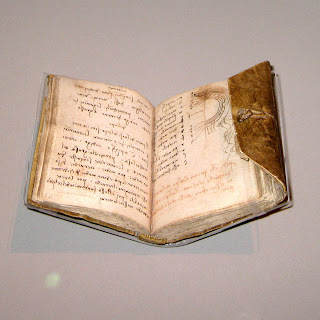 The highlight of the visit for me was this exquisite, tiny notebook, which belonged to Leonardo Da Vinci. There is something rather magical about seeing the handwriting of a famous person from the past, it retains an immediacy which the printed word lacks. I suppose it is a bit like the difference between a handshake and a text message.

Eventually we had to tear ourselves away from the museum and face the horrid, cold, wintery weather outside and thought how lovely and warm the lady with the miniver coat would have been.
Posted by Acornmoon at 11:20